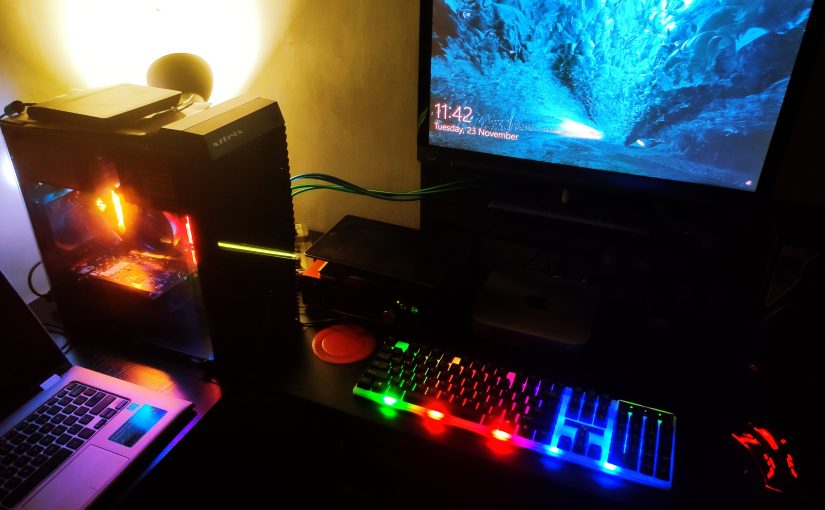 Why the hell Windows?

You might be asking why the crazy idea of using Windows as a workstation. I have been using the Mac almost exclusively for at least a decade since being issued one for work and enjoy using it despite major hiccups every OS version update. The main reason is I wanted to separate work from play since I also use it for music and hobby graphics programming stuff. Sometimes having all those in the same machine gets me distracted from work.

It’s known that most Macs don’t come with discrete graphics cards. Only the very high end laptops and desktops do and that is normally out of reach for most users, budget-wise. So with that considered, a Windows desktop with a decent entry-level configuration for more graphics intensive use is the quicker and more pocket friendly path. The next move is to find a gaming computer or package in the $1000 range. I will be using it for Blender 3D, Unity 3D, three.js and the like, and live visualization applications like TouchViz.

I would also like to use it as a video production unit. I know it’s not the strongest point of Windows. That’s where the Mac shines. I bought a very basic (and cheap) editing app HD Movie Maker Pro and it’s a pain to use. I also have Adobe After Effects so maybe that’s a better option even if it’s overkill in features for simple video editing. Looking into Lightworks but the features I need are in the paid version for $160. Its basic version only exports to a max of 720p resolution. I’m sticking with HD Movie Maker Pro for now.

With respect to producing and recording, I have Cakewalk that is exclusively Windows. I want to revisit my old Home Studio and Sonar recordings from the 20 or so years ago and use more current software. It would be good to finally have a dedicated unit for it instead of trying to mix stuff just using a DAW on the laptop. This maybe in prep for building a basic home studio.

My main DAW by the way is FL Studio (beats and virtual instruments) partnered with Cakewalk for vocal recordings, live instruments (guitars and synths) and the final mixing.

The next consideration is whether to install Linux or not. It is known to support NVIDIA cards but unfortunately most of the programs I need don’t have actual counterparts. Windows has WSL though and I will be investigating that for my node.js and JavaScript canvas stuff. How that will go will be another thing to blog about. So stay tuned.